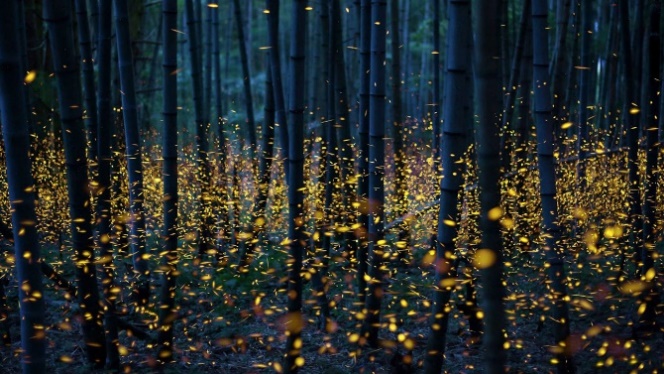 Fireflies in a forest in Nagoya

If words contain the reality that they name, in some unknown place silence must exist. But in this noisy society the effort needed to find it is ever more arduous, whether we’re looking inside ourselves or in our surroundings. We’ve turned noise into a nearly indestructible wall, a border; we’re surrounded by clatter, bustle and commotion, and we live in a rush, at a dizzying pace, as we try to smash through the fortress wall of time, suffering and loneliness.

Amid such a roar, she who seeks silence longs for the beneficial effects that emanate from every sense of the word. Yet silence is a concept that has, much like the moon, a hidden face, an underside, a dark side, which is where we find those who use it as punishment: those who love judgement and condemnation have turned the lost island of silence into a cold exile; he who is different, she who is uncomfortable naming things are condemned behind a wall of silence, to ostracism. And thus, disregarding that speech is free, Putin’s government, finding the cold of the gulag to be insufficient, has attempted to banish from secondary school reading lists books by Boris Pasternak, Anna Akhmatova and Osip Mandelstam. Many condemned poets, after writing their poems in their heads for lack of paper and a pencil, have managed, thanks to their memory, to survive and bring to light their creations, in defiance of the executioners who do not recognize that even though they condemn the body to unbearable punishments, it is not possible to build a barrier against words and the imagination.

There used to be wise men who claimed that there were words when everything began, filling up the void of silence. As a baby gestates, the words that surround the womb gradually grow into his innermost skin, and upon being born, the sound of those words that he unconsciously recognizes will become his most soothing lullaby.

True words are those that form bridges between reality, thought and human beings. Built into that ancient bridge that has survived the passing of so many centuries are certain building blocks that constitute poems. In Japan fireflies are loved not only for their beauty but because they are a reflection of a tidy character. Poems are like the fireflies that fill the forests of Nagoya; they are the sign of a society that is culturally mature, profound and healthy.

We are surrounded by noise and the din of it drowns us. I believe that silence is a being that disappeared long ago, if it ever existed it all; the only vestige we have are the true words, those which guide us towards calm and serenity but may also cause us discomfort in that they are a powerful signal that sends out a warning, much like smoke. Smoke, however, doesn’t get good press, which is why the great poet Francisca Aguirre dedicated a poem to it:

“Smoke is an odd kind of waste,
it gets very bad press.
It gets left behind,
it’s misunderstood;
almost nobody remembers that smoke is a foreshadower,
a sad messenger of what’s to come.
When I hear its helpless cry
I sing it the lullaby for silence
so it doesn’t feel alone.”